Scientists and aerospace veterans, many of them still in awe at the cascade of smoke and fire, the roar of a 20-story machine hurtling into the sky, and the sight of a billionaire’s electric car floating past Earth, welcomed Elon Musk to the podium in Cape Canaveral this week.

Given that Musk’s private aerospace company SpaceX had just launched the most powerful working rocket in the world, casting a Tesla towards the asteroid belt, it was hard to find anyone who disagreed with him. The Falcon Heavy rocket was years in the making, costing about half a billion dollars, but its maiden success has galvanised scientists, engineers and businessmen, seemingly overnight.

“He’s being Elon again. I’d call it competition, and competition is the American way of life,” said John Logsdon, professor emeritus at George Washington University and founder of the Space Policy Institute. “SpaceX has challenged the traditional launch industry in the United States and in Europe and in China and in Russia.” 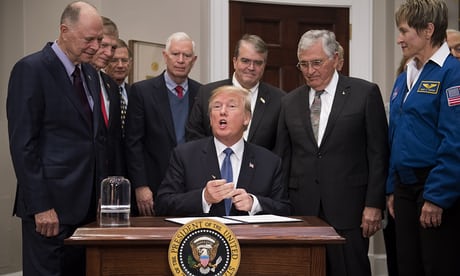 To infinity and beyond: Trump has big plans for Nasa – but is it just a fantasy?

In just over 15 years, SpaceX has muscled its way into spaceflight, a realm long dominated by space agencies like Nasa and their main contractors, Lockheed Martin and Boeing. Nor was Musk alone: Amazon billionaire Jeff Bezos beat him to landing a reusable rocket through his own company, Blue Origin, and Richard Branson and a slew of other entrepreneurs have followed with lighter-lift rockets.

“The space age was born out of a race between governments, starting with the Sputnik moment,” said Phil Larson, a senior science adviser in Barack Obama’s White House and a former SpaceX official, referring to the first satellite launch into orbit, in 1957 by the Soviet Union.

“What we’re seeing in the last five to 10 years is this fomented competition between companies,” Larson said, “and sometimes between governments and companies.”

“The Falcon Heavy shows how far we’ve come,” he said. “There are many new rockets being developed, some light, some superheavy, some in between. That’s the new paradigm we’re in.”

The new space race is something stranger than the cold war contest between the US and the Soviet Union. Government agencies, like Nasa, Roscosmos and the European Space Agency, have been collaborating with each other for decades – and now face friendly competition and partnerships with corporations, which have their own long-term goals.

“What’s new is that the companies themselves have ambitions beyond government contracts,” said Casey Dreier, director of space policy at the Planetary Society, an advocacy group. He compared it to the Gilded Age, when billionaires sought to single-handedly reshape the future, or at least the marketplace, for good or ill.

“There’s really no downside for Nasa,” he said. “They’ve got this new capability at their disposal, and will be wiping away the drool thinking about all the opportunities they have for that rocket to reach out to other planets.”

Both SpaceX and Blue Origin are at work on rockets fit for human travel, on very different tracks. Bezos’s company is working on its “New Glenn” rocket, larger than its current reusable New Shepard rocket, which is smaller than the Falcon 9 vehicles that SpaceX has turned into reliable shuttles for Nasa cargo. Musk has set his sets on a device even bigger than the Falcon Heavy: a rocket SpaceX calls the BFR (Big Falcon Rocket), which would take humans deep into space.

Nasa is working on its own super rocket, called the SLS, which would be the most powerful ever designed, and its likely tool for a new space station or deep-space exploration. The agency faces its own hurdles, however: it has gone a year without a confirmed administrator, due to Senate inaction around Donald Trump’s controversial nominee, and for decades Congress has kept Nasa’s funding around only 0.5% of federal spending, a tiny amount compared with social security, defense, or the infusion of money Nasa received during the Apollo era. But the success of the Falcon Heavy, experts said, was one more device in the toolbox for Nasa’s many missions – all the more attractive for its low cost.

SpaceX and Blue Origin have made reusable rockets a reliable business for Nasa and telecom companies, and are advertising at a fraction of the price of government rockets. SpaceX’s Falcon 9 rockets operate at an average cost of about $60m per flight, and its Falcon Heavy at a cost of $90m to $160m, depending on modifications. Nasa estimates that its SLS will cost about $1bn or more per flight – the price of reliability and safety over reusability. 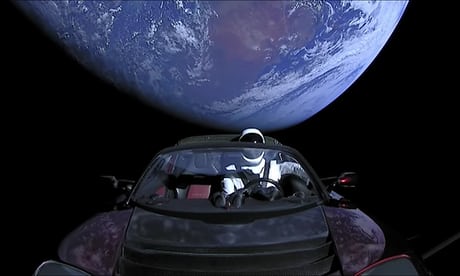 “We’re finally reaching the point where there’s a robust marketplace,” said Jeff Manber, CEO of the space company Nanoracks. “It won’t just be on the one pillar of government-organized or government-funded.”

Manber stressed that in this new market, competitors have to work together, and with governments – their biggest customers – meaning that this new space race, between nations, corporations and billionaires, was about risk, reward and ambition among many diverse players. His own goal is ultimately a private space station, and his company has contracts with Blue Origin and government agencies.

“There are races but it’s not a monolithic race,” he said. “It’s not to get the first human to the moon or back. We want to be part of a society moving to space.”

And while SpaceX has managed to turn reusable rockets into a routine business within a few years, it has yet to live up to some of Musk’s middling ambitions, never mind his ultimate goal of colonizing Mars. In 2016 SpaceX had a rocket explode on the launchpad, destroying its expensive satellite payload and causing severe damage to the Nasa base. Earlier this year, something mysterious went awry with a US government payload SpaceX launched into orbit. And last year the company announced that two private citizens had booked a trip to travel round the moon, presumably on the Falcon Heavy – a goal Musk walked back dramatically this week.

Marcia Smith, an editor at the journal Space Policy, called the Falcon Heavy launch “amazing” but quickly added a caveat to Musk’s goals. “He has a track record of overselling on promises,” she wrote in an email. “And he has never launched a person yet (mannequins don’t count!). The commercial crew flights will be a bellwether for whatever comes next for SpaceX in human spaceflight.”

Nasa has set strict safety requirements for human spaceflight, but Congress and the Obama and Trump administrations have taken a light touch to regulating the private space industry. Logsdon, the professor, said that in due time those regulators will face a problem: “whether somebody with enough discretionary money to take a joyride around the moon cares about Nasa’s human safety requirements”.

For the moment, however, the experts mostly enjoyed the moment. “SpaceX is pushing the boundaries on what is possible, and upping the ante for others,” Dreier said. “You couldn’t have had a better day for SpaceX.”

“Honestly it was just a really exciting day to be a human,” he added. “It’s a reminder of excitement and success, but also a little bit of strangeness to what’s possible. Something kind of weird and fun, because that’s what makes us human.”

… we have a small favour to ask. More people are reading the Guardian than ever but advertising revenues across the media are falling fast. And unlike many news organisations, we haven’t put up a paywall – we want to keep our journalism as open as we can. So you can see why we need to ask for your help. The Guardian’s independent, investigative journalism takes a lot of time, money and hard work to produce. But we do it because we believe our perspective matters – because it might well be your perspective, too.

I appreciate there not being a paywall: it is more democratic for the media to be available for all and not a commodity to be purchased by a few. I’m happy to make a contribution so others with less means still have access to information. Thomasine F-R.

If everyone who reads our reporting, who likes it, helps fund it, our future would be much more secure. For as little as $1, you can support the Guardian – and it only takes a minute. Thank you.

most popular in US